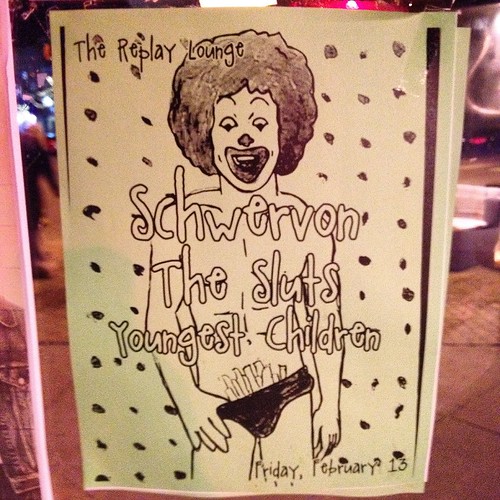 Past Live have served me well

I hear the music
almost every day.

Lucky duck,
Lucky duck
Holy mother fucking fuck
What did I do to deserve
Being such a goddamn
lucky Duck

My brain
A passion field
Done up in marshmallow
And butterscotch

Bitter Ale flows from my stein?
I see my shirt
covered in glitter and cheese corn
My heart will stop some day
But my love will never end

A hard pea lodged
Beneath my mattress?
Twinkle Santa Claus eye
Rising from the middle
Of my forehead

The man on my tail?
I see that’s not gold
You lied for money

Crusty old man
Texting in his car
Screams at me from his
Open window
Get a job ya bum!

I scream back at him
Thank you sir!
I know
I’m sorry!
What can I say.
I just am
Such a Mother fucking
Lucky fucking duck!

(This poem was recited for the first time on Friday February 13, 2015 at The Replay Lounge in Lawrence, KS)

You’ve had quite a year. And you’ve been such a good boy little boy, I got you some real special Christmas presents. First off , for Santa, I’ve left a tall frosty glass of Edward Snowden with a big fat Obamacare cookie for you to munch on. If you take a look under the tree you’ll find some other special presents. I got you a shiny red gay marriage bicycle with some Occupy toy soldiers and an endless supply of Pussy Riot dolls. If you look further you’ll see a yummy Noam Chomsky candy cane and a big fat legalized Marijuana football. Also a beautiful and delicious Rachel Maddow, Elizabeth Warren, Kim Gordon fruitcake. And if you’re really really good you just might get that Official Red Rider, 200 shot, range model pump action Miley Cyrus air riffle.

So Happy Holidays asshole. Enjoy it while it lasts We’ll still be here in 2014 to fill your year with real fairies of real love and real dance and plenty of noise to wake you from your deep lost sleep.